The Policy Change Index for Outbreak (PCI-Outbreak) measures the severity of an epidemic outbreak in China, such as the coronavirus disease 2019 (COVID-19), using the 2003 severe acute respiratory syndrome (SARS) as the benchmark. The higher the indicator, the larger the scale of the outbreak. 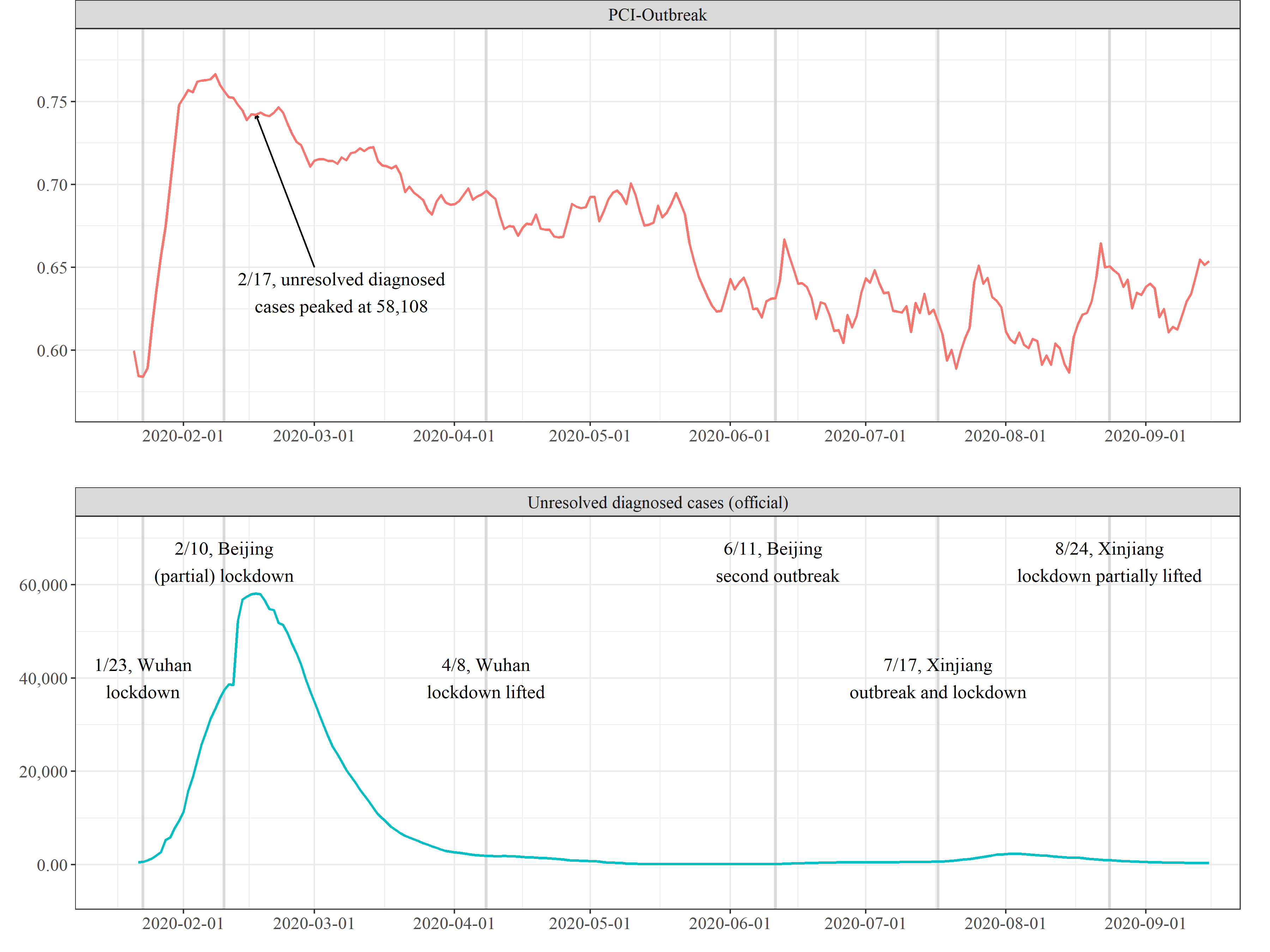 The figure above plots the PCI-Outbreak for COVID-19 in China, in comparison to the number of unresolved diagnosed cases officially confirmed by the Chinese government.

How severe was COVID-19 in China, really? It is widely suspected that the country’s official numbers of diagnosed cases understate the extent of the outbreak, and even the official statistics themselves are incoherent. On February 13, 2020, the Chinese authorities confirmed more than 15,000 new cases nationwide—40 times the previous day’s number—because of a change in counting criteria. Just two months after that, they revised the death toll for the city of Wuhan, the epicenter, upward by 50 percent, citing unspecified omissions.

The PCI-Outbreak uses a deep learning method to measure the severity of COVID-19 in China, not through the Chinese government’s official numbers but through how state-controlled media talked about the outbreak. The algorithm is trained on SARS-episode articles in the People’s Daily, the official newspaper of the Communist Party of China, to understand the tone and tenor of the SARS-episode narrative as the epidemic cycle evolved. The algorithm then assesses future outbreaks’ severity against the SARS benchmark.

The PCI-Outbreak is built on the idea that words can speak louder than (some) numbers. While it may be simple to release false statistics, it is more difficult to conceal the truth when the government has to address a crisis, such as a severe infectious disease, at length in the media. Take the beginning of COVID-19 for example: When the Chinese government announced a lockdown of Wuhan, a city with a population of 11 million, and its neighboring cities and discussed the necessity of doing so in state media, the Chinese authorities had confirmed a total of fewer than 600 cases of the novel coronavirus across the country. Therefore, changes in words during the outbreak may provide us with a clearer picture of the severity than official numbers do.

To detect how the narrative evolves, we build a deep learning algorithm to “read” People’s Daily articles published during the SARS episode. Using the Bidirectional Encoder Representations from Transformers (BERT), a natural language model developed by Google, the PCI-Outbreak algorithm takes a two-step process:

Because the 2003 SARS outbreak in China went through a typical epidemic cycle — starting in November 2002, peaking in May 2003, and being contained in July 2003 — the timing of publication is effectively a proxy for the spread of the disease.

Once the algorithm is trained, we deploy the program to People’s Daily articles during the COVID-19 episode. Because the algorithm has learned from the past episode, it would make two predictions on the current data: whether each new piece of text is related to an epidemic and, if so, when the text would have been published in the SARS timeline. The second prediction will likely be factually incorrect — classified as from 2003 but actually from 2020. But this error is exactly what we aim for: Each date in the COVID-19 outbreak timeline is cast back to the SARS timeline and, therefore, results in a metric of severity in the SARS epidemic cycle and how the crisis is truly perceived by the Chinese authorities.

The figure shown above contrasts the severity measured by the PCI-Outbreak and China’s official count of diagnosed cases. We make three observations: